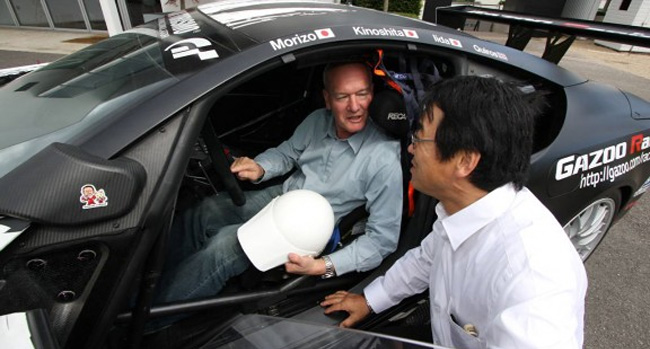 Along with their driving impressions and technical analysis, Road & Track also had a chance to ask Lexus LFA chief engineer Haruhiko Tanahashi a few questions:

What were the most difficult challenges you faced?

This is difficult to answer. In Toyota, the highest-performance car we had in the past was the Supra. It had its own high-performance technology. But the Lexus LFA is not an extension of that. In that sense the LFA breaks all the boundaries we had. This is something totally new for Toyota. We had to create a new type of high-performance car. For instance, a high-revving engine and a high engine output mean a lot of heat generated, and we had to cool it down. In that sense, all these performance elements are new and challenging. The LFA was not based on existing knowledge. We had to learn as we went along. We failed, we learned, we stood up again.

It’s a great interview that gives a brief glimpse into the creation of Toyota’s first supercar—recommended reading, to be sure. Perhaps the most revealing answer was to the last question:

If you had another five years, what would you do with the LFA?

First of all, I really have to ask myself if I am mentally motivated to go on for another five years. I have dedicated one-third of my company life to the LFA. However, if there is more time, I could see an open car or hybrid. These are the wishes. Of course, if there is time, those are the ideas.

I can definitely see the LFA moving into different territory once the initial run of 500 units is sold and delivered—certainly wouldn’t be surprised to see a hybrid version or a convertible down the line.