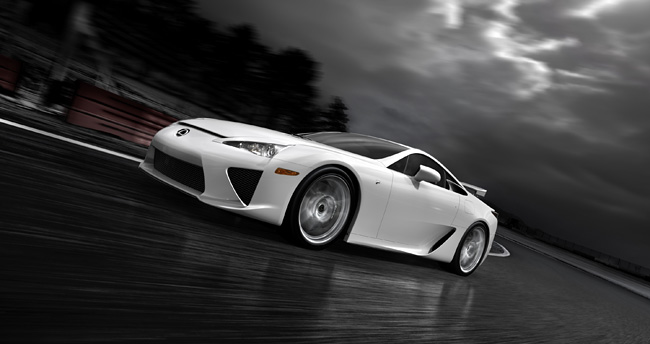 Road & Track has turned in their first impressions of the 2011 Lexus LFA:

On the roads around the Nürburgring, the LFA is docile. Even with 560 bhp on tap, the car doesn’t need to be driven in anger to appreciate its power and road-hugging ability. Put the paddle-shift transmission in the sportiest setting and the gear swaps are snappy. And although the gearbox is mildly clunky in traffic, with a few rattles and hisses as the clutch engages and disengages, this is by far the best single-clutch hydraulically actuated transmission on the market.

With no adjustable dampers, the LFA has a ride that’s not harsh, especially when considering that the car is also tuned for track use. Tackle a corner a bit more aggressively and the Lexus responds with quick turn-in. On the Autobahn where the car can stretch its legs, 180 mph can be reached easily with absolute stability and confidence.

Road & Track is always good for a more technically detailed review than most magazines, and it’s no different for their coverage of the 2011 Lexus LFA. Included in with the driving impressions is a deeper look at the more esoteric aspects of the supercar:

To achieve quick and smooth engine response for its V-10, Toyota worked with longtime partner Yamaha — well known for its high-speed valvetrain expertise. Individual throttle bodies for each cylinder, forged aluminum pistons and carbon-coated rocker arms (with integrated oil jets), plus titanium connecting rods and valves, contribute to the engine’s ability to rev from idle to 9000 rpm in a mere 0.6 sec. In fact, the powerplant spools up so quickly that only a digitally simulated analog tachometer can keep up.

(Even after almost a week since the LFA’s introduction, I’m still making my way though the mountain of driving impressions and first reviews. Expect a number of links throughout this week.)