When the Lexus LFA launched yesterday, a media embargo was lifted and the gates sure opened up! Here’s a couple more first drive articles:

Auto Week’s Mark Vaughn gives a detailed description of what it’s like to drive the supercar, along with a great quote from the LFA chief engineer:

“In our religious philosophy we say, ‘As long as you are in the hand of the Buddha you are safe,’ ” is how chief engineer Haruhiko Tanahashi described putting the weight out at the ends of the car for better inherent stability. “You can have the best pleasure, but you are safe.”

The biggest thing you learn about a car on the Nordschliefe is its transitional handling characteristics—how it feels shifting its weight from one side to the other. In several instances we determined that, with a lesser car, we would have been flying backwards over the skinny guardrail and into the trees.

The stability that Tanahashi described was in evidence at every one of these flingingly fast turns. Only a couple of times did we feel that it was the electronic stability control that saved us from infamy; in the vast majority of the corners; it was that hand-of-the-Buddha thing that kept us out of the weeds. And our own skill, a little. 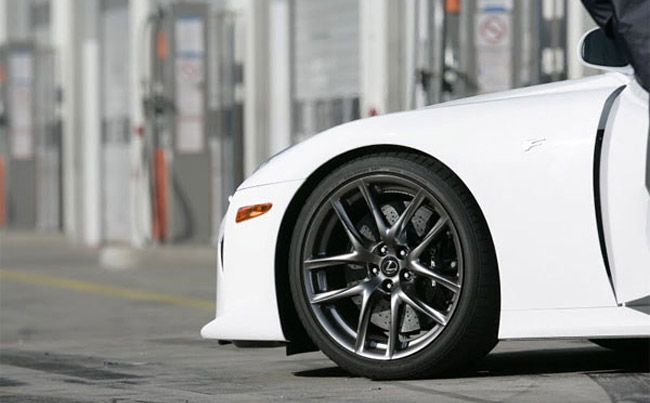 I don’t know what to make of the review at Popular Mechanics, I sense some conflicted feelings:

“We sought a functional but restrained style,” says Harukiko Tanahashi, the chief engineer on the project.

They found it, too. The LFA has a well-made style of its own, from the accommodating leather bucket seats, to the high dashboard which restricts vision but also gives an impression of safety and security…The only bum note here is the carbon-fiber and leather steering wheel, which is no fun to touch, not well made and is horribly squared off.

Lexus that each one of the 250 limited-production run will lose money, the LFA ticks all the boxes in the lexicon of supercar. It’s also genuinely charismatic, with a feel and spirit all its own. Such a pity it’s at least five years too late…Lexus has shown it isn’t above the pride and hubris that marks out the truly Quixotically super, supercar maker. Mission accomplished, then.

Here’s the rest of that article.