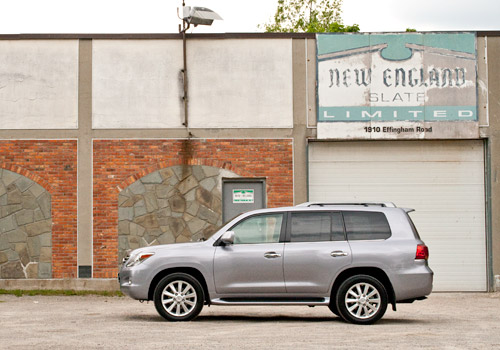 The 2009 Lexus LX 570 is, at its very heart, a contradictory vehicle. After all, Lexus’ flagship SUV attempts to bridge together two contrary styles — ultimate luxury and ultimate utility. It seats eight, yet has a fixed rear axle and can tow up to 8,500 lbs(3,856 kg). It’s packed with every conceivable automotive luxury and convenience, yet it’s capable of climbing up the side of mountains.

When the LX 570 debuted in 2007, it was the first Lexus SUV to be redesigned using the L-Finesse design language. Unfortunately, it seemed the process had stripped out most of the SUV’s character. The boxy exterior of previous generations had always reflected the vehicle’s utility, and instead the LX 570 was something smoothed out and low on definition.

But as other luxury manufacturers move to more and more complex designs, the LX 570’s subtlety has become more and more appealing. The solid, strong lines, especially noticeable in the front fenders and lower door arches, give the SUV a sophisticated look that has aged well. It can look a little top-heavy from the side, even sitting on 20” wheels, but every other angle is quite flattering: 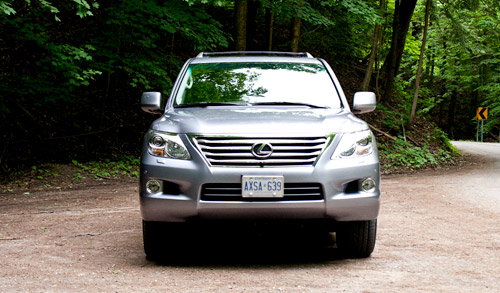 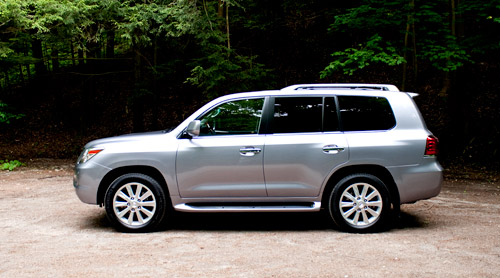 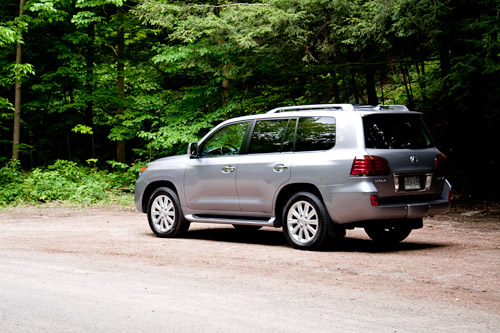 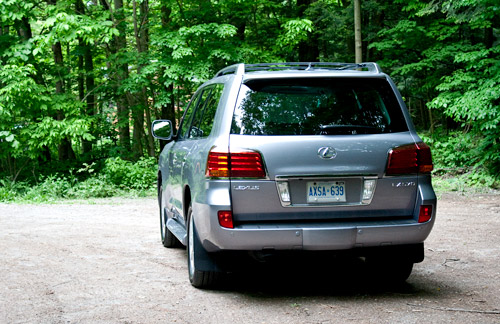 The actual size of the LX 570 is intimidating — from the headlights to the door handles, from the spokes in the wheels to the overall size, everything about the LX is absolutely massive. At speed, the SUV casts an imposing presence, dwarfing all but the largest vehicles on the road, and it’s the resulting confidence that defines the vehicle’s personality.

Really, the only thing excessive with the exterior is the over-eager chrome accents on the tail lights, and that’s stretching it: 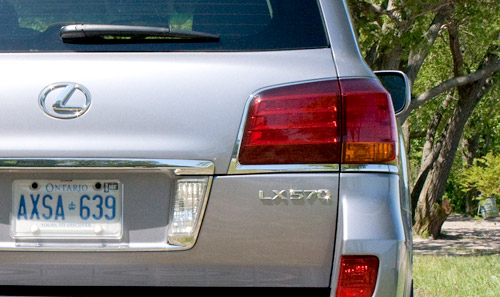 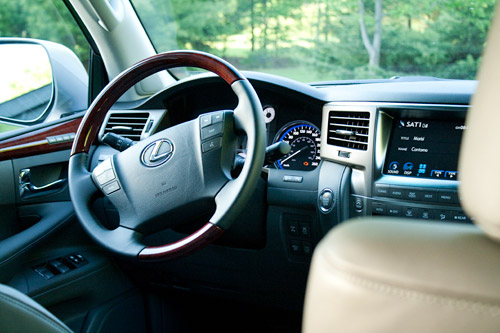 With its wide assortment of buttons and toggle switches, the LX 570 interior can be overwhelming at first. But after consulting the owner’s manual, setting a number of preferences, and going through the functionality, the button layout makes more sense. Most of the controls surrounding the steering wheel are of the “set-once-and-forget” nature, with all of the more frequently accessed buttons clustered around the center dash and console. This does cut down on the visual clutter, but this is still one area where the utilitarian side of the LX wins over the luxury side. The more arcane controls, like the button to disable the adaptive front headlights and the one to turn off the rear airbags, might have been better served with a hidden panel similar to the one found in the GS.

One small detail that I really liked was this wide strip of chrome under the radio, which created a reflection that continually caught my eye: 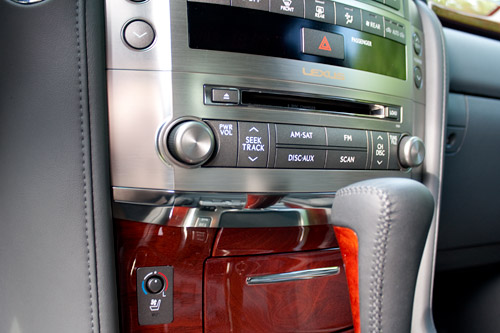 The utility-truck control layout is balanced by the rest of the interior, which is all sorts of luxurious. The expanse of leather throughout the cabin is astounding, generously applied in every conceivable area, including the center console bolsters: 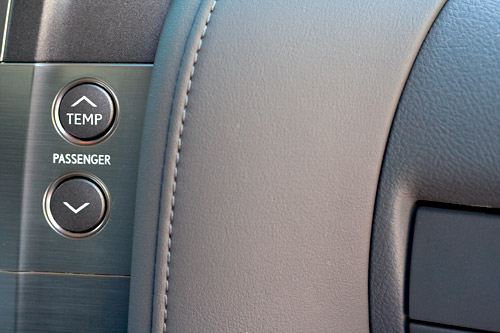 The rest of the materials are first-rate, including the feel of the buttons and the cut of the wood accents: 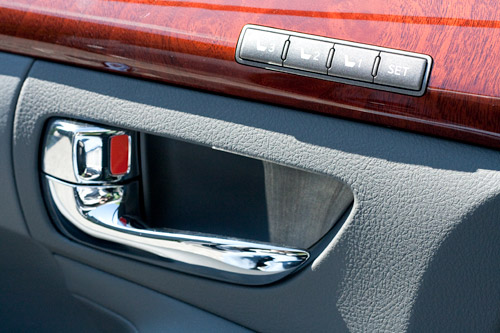 The driver’s seat alone is adjustable in 11 different ways, and any seat in the first two rows is just as comfortable. The third row bench seating is cramped but not incredibly so, and is perfectly fine for adults on a short trip or children on a longer one. However, because the second row is also bench seating, there was some difficulty getting in and out of the very back. More critically, because of the fixed rear axle, the third row doesn’t fold into the floor, which limits the cargo capacity. 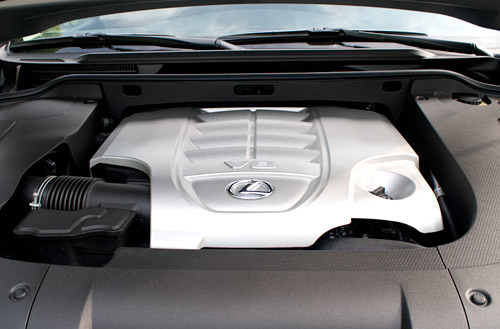 With a monstrous 5.7L V8 providing 383 horsepower and an outrageous 403 lb-ft of torque, the LX 570 certainly doesn’t want for power. Apply a heavy foot and the SUV can be launched like a space shuttle (and likely burns just as much gas), rocketing to a manufacturer estimated 0-60 mph of 7.4 seconds. Even better, pushing up the RPMs feels like driving a guided missile and makes the sound of speeding tank.

The LX manages the speed well. Handling is just the right mix of resistance and ease — tough enough to remind the driver to be careful but light enough that it’s never a struggle. Cornering suffers from typical truck understeer and body roll, and needs to be respected, but any real difficulties can be dealt with by engaging the massive, show-stopping brakes, which react instantly and decisively.

It’s impossible to talk about the LX 570 without addressing its “go anywhere” capability, but testing this feature without damaging the vehicle is a challenge best left to others. I did try out the Crawl Control feature, which is essentially a cruise control for offroading — but the extent of my experiments consisted of going through a ditch at a local park and climbing a 6-ft. hill in my backyard, which was no harder than navigating a mall parking lot: 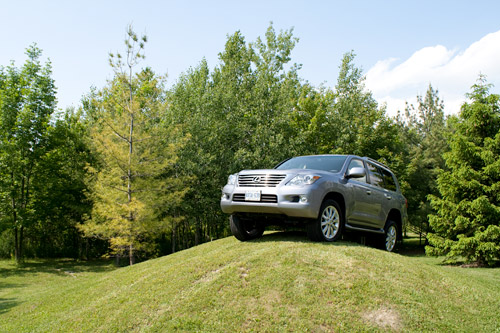 Still, all of this performance talk ignores that the LX is best driven in a predictable, deliberate manner, cruising from destination to destination. The SUV has a natural speed of about 65 mph, and settling into that groove with a full group of passengers is one of the best driving experiences I’ve ever had.

The LX 570 has a number of interesting standard features, most of which are related to its extraordinary size. The Driver Assist cameras placed in the front grille and under the passenger’s rear view mirror are immensely useful in parking, though the front-view camera’s 180° view feels unnatural and difficult to visualize (no doubt this would cease being an issue after some usage).

Perhaps my favorite feature, and one that I used more than any other, was the adjustible ride height suspension, which allows for raising and lowering the vehicle’s height. It’s even possible (by using one of the many buttons) to lower the vehicle once it’s turned off, making it easier to exit and enter. In essence, it’s like creating a pure luxury feature out of the extremely functional ride height control.

I couldn’t resist, I had to film the vehicle’s height range (warning: slowest video ever):

Really, the absolute best feature of the LX 570 is the feeling of safety. The ten airbags, the four-wheel active traction control, the massive brakes, the spacious interior — they all come together to create a very real sense that you and everyone inside the vehicle are protected.

So, is the LX 570 excessive? It depends — can a vehicle be excessively capable? Excessively luxurious, safe or comfortable?  To me, these are qualities that can not be overdone. Even its price tag, high as it is, doesn’t feel outrageous.

Make no mistake, the LX could be considered a perfect specimen, flawed only in the way all vehicles of this class are. It all comes down to expense and necessity. If you need to transport large groups of people frequently and are used to the finer things in life, there is simply nothing like it. Sure, the off-roading features may seem unnecessary, but they add to the feeling of well-being that comes with driving the LX 570. After all, what’s better than being prepared for anything?

Special thanks to Lexus Canada for providing this review vehicle. You can view the full Lexus LX 570 specifications at the Lexus Canada website.