END_OF_DOCUMENT_TOKEN_TO_BE_REPLACED " /> Pistonheads Drives the Lexus LF-A | Lexus Enthusiast
Menu
Log in
Register
You are using an out of date browser. It may not display this or other websites correctly.
You should upgrade or use an alternative browser. 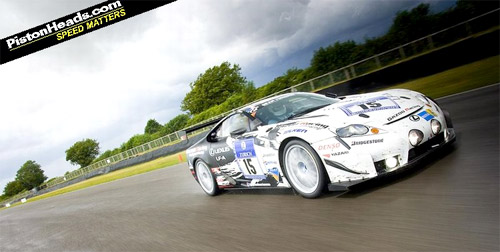 During the Goodwood Festival of Speed last weekend in Great Britain, a group of journalists were given the opportunity to drive the Lexus LFA racing prototypes that raced last month in the Nürburgring 24h. One of these journalists was Chris Rosamond, and he’s written a stellar account of the experience:

The racing car accelerates flat and hard with a typical V10 howl; harsher, more mechanical and somehow less mellifluous than a V12, but spine-tingling all the same. The effect is amplified by the racer’s stripped-out interior and race exhaust, but if the Lexus engineers can keep any of that sound for the road version, then its owners are in for a true aural treat.

Although it very much looks the part in race trim, the LF-A competed in the production class at the Nurburgring, which means it’s not very far from the road car that Lexus is expected to reveal later this year at the Tokyo motor show.

There’s plenty of info packed in this article, and makes for a very entertaining read. His overall impression is extremely positive, unsurprising when you consider the supercar’s long development period. One small detail of note:

No performance figures or official outputs have been revealed, but when we had a look under the bonnet somebody had scrawled ‘#557 P’ with a marker pen on one of the cylinder head covers. Could this have been the record of an engine dyno test?

Also be sure to check out the article’s photos, which are impressively detailed.