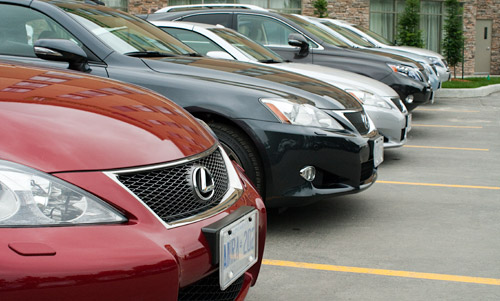 This past Friday, I attended a Lexus Canada press event in Kingston, Ontario, where I had the opportunity to test out the 2010 RX 450h and the IS 350C convertible. After an a quick briefing, we all loaded up into our first vehicle of the day and set out on a route through the surrounding Prince Edward County.

Here are some of my early impressions on Lexus’ latest models (full reviews at a later date): 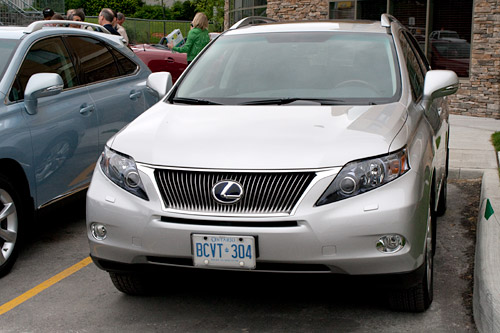 The morning sky was overcast and dull as I pulled out of the hotel parking lot with my first vehicle, the RX 450h.

I’ve been a fan of the new RX design since day one, and the minor hybrid accents are spot on. The blue tint in the headlamps is especially nice, though I’m not sure how fond I am of Lexus’ new clear tail lights. Of course, With any redesign, there’s always a fine line between maintaining the look and pushing the design forward, and I think the RX designers did a great job at balancing the two opposing views. While the general shape remains the same, the lower stance and streamlined shape brings a much needed modern look.

I had driven an RX 350 to the event, which made it much easier to compare the driving experience between the conventional and hybrid engines. It speaks well to the Lexus Hybrid Drive improvements that the only discernible difference between the two engines was the hybrid’s superior fuel economy and pure silence at full stop. The gas-to-electric power switching has been smoothed out considerably over the previous generation, removing one of the only possible complaints with the hybrid technology.

Both the RX 350 and the 450h have just the right amount of power, though the additional electric engine in the RX 450h provided that extra bit of push that made for a more enjoyable driving experience overall. Both engines were more vocal than I expected, and it gave the SUV a sporty touch. The EV mode, which allows for electric-only power, was fun to experiment with, but with no quick activation button on the dash, it was of limited usefulness. Navigating to the proper menu item with the steering wheel controls is easy enough, but it’s just enough of a barrier that it would take a particular situation, rush hour traffic for instance, before you’d bother activating it. Still, with the 50km/h (30mph) speed limit in EV mode, it’s probably for the best.

The low stance inspired more confidence while driving, especially in the corners, and the brakes were only slightly spongy. Compared to the outgoing model, the RX maintains its very predictable handling and easy ride, and it didn’t take me long before I was spending the majority of my time trying to lower my MPG and playing around with the new Remote Touch controller.

Lexus’ new interior system allows for mouse-like control of the navigation, audio, and heating controls, and replaces the touch-screen control scheme. The added haptic feedback, which creates a physical click on buttons through the controller, makes the system feel much more responsive to input. It also makes it possible to navigate using only peripheral vision, something that was previously impossible to do. One thing that is missing from the system is a Back button, which would make navigation even easier. 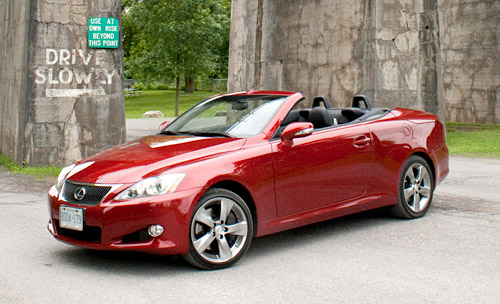 My time spent with the IS 350C was quite eventful, starting with the clouds breaking and the sun coming out the minute I sat behind the wheel. Naturally, the first thing to do is play with the roof controls, which takes just under 20 seconds and is surprisingly subdued and fluid considering its speed. The subtlety of the roof was counteracted by the experience of driving in a brand new Matador Red convertible through the town of Odessa, which was as flashy as it sounds.

Examining the IS-C at the Toronto Auto Show earlier this year, I had thought the rear frumpy and strangely proportioned with the roof down, but on real streets with people sitting inside, it’s much less pronounced. It’s funny, but someone in the drivers seat makes a big difference in how the vehicle looks. As well, the IS-F design cues in the front bumper make for a sportier looking front-end, as do the unique rear lights. Still, no matter how contrary it may seem, but I still prefer the IS-C with its roof up — if I squint my eyes, I can almost imagine it as a true IS coupe.

The open-roof ride felt no louder than driving with the windows down, and was considerably less hectic at high speeds, likely due to the rakish profile of the front windshield. The interior is pure IS, though the dash and door plastics feel tougher than in the sedan, similar to the IS-F. The rear seats are tight but functional, and the quick access buttons to push up the front seats makes about as easy as having four doors. With the roof up, the ride turns whisper quiet, only a touch noisier than the IS 350 sedan.

Having the roof down and being able to hear the IS 350’s engine made for a welcome change, even though I found myself cruising more than usual (if only from looking around because of my expanded field of vision). However, when called on, the 306hp V6 certainly didn’t lack for power or acceleration, even with the added weight of the convertible roof. Handling remains essentially the same as the sedan, with only a minor bulky feeling in the corners and the suspension managed well even though a rough construction patch, with no excessive vibration or shaking due to lack of rigidity.

Near the end of my time with the IS-C, a warning light popped up on the dash just as I felt the rear of the car start to wobble. I pulled over to discover I had picked up a flat somewhere along the way, most likely due to driving through the construction zone. Just as I set to taking out the spare (mustard colored, of all things) the Lexus Canada support staff came along and helped me swap tires. 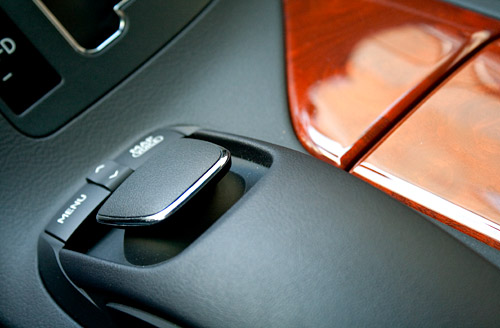 At the next switch, it was into the same RX 350 that I had driven to the event along with a new passenger, Glenn Alkema from the Lexus training academy. Driving through Prince Edward County, we had a very enjoyable conversation on our way to lunch at the Devonshire Inn.

After that, it was back into the RX 450h, only this time equipped with Dynamic Radar Cruise Control, and more importantly, the Heads Up Display (HUD). The HUD is a display built deep into your dash and reflected off the windshield, displaying your vehicle speed “float” about two meters (6.5 ft) ahead of the steering wheel. Also displayed are navigation directional arrows and the current audio which makes it an essential feature the minute you start using it.

The final leg of the route was down the highway back towards the hotel, which gave me a chance to try out the radar cruise control. Available on the RX for the first time (though only on the hybrid), this improved cruise control makes it possible to automatically modulate your vehicle speed depending on the vehicle in front of you, slowing down and speeding up as necessary. More than anything, it had me marveling at just how far automotive technology has come — this is as close as you can get to automated driving without employing a chauffeur. Understandably, I didn’t test the limits of the system, but for mild traffic volume, it worked smoothly and with no abruptness. No doubt it would be a welcome luxury after a long day at work.

With the return to the hotel, the test drive was over and it was time to return home. Even after an early morning and a full day of driving, I left the event feeling refreshed and relaxed, which probably stands as one of the best features of both of these new models. This is especially apparent with the new RX, which looks to set a renewed tone for Lexus comfort and luxury and brings with it a refreshed interior design that I hope makes its way across the Lexus lineup.

Special thanks to Lexus Canada for the invite, and to Melanie Testani, Sandy Di Felice, Marc Stuyver & Glen Alkema for their hospitality.

EventsF SPORTFeatures
Hard to beat a day at Laguna Seca.