END_OF_DOCUMENT_TOKEN_TO_BE_REPLACED " /> Edmunds Reviews the Lexus HS 250h | Lexus Enthusiast
Menu
Log in
Register
You are using an out of date browser. It may not display this or other websites correctly.
You should upgrade or use an alternative browser. 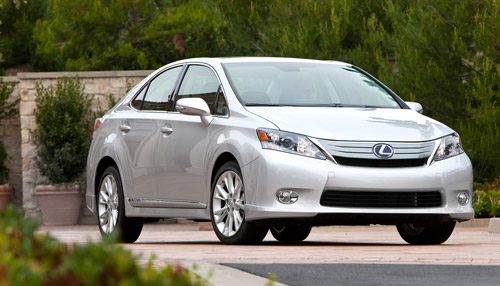 The Lexus HS 250h reviews keep coming—next up is Edmunds, who have heavy praise for the interior of the new hybrid:

When it comes to cutting-edge features, the 2010 Lexus HS 250h leads its class. And it doesn’t hit you over the head with its hybrid nature. There’s no freakish space-pod Prius-esque dashboard. The numerous controls are laid out logically and operate with an eye toward intuition. Aside from the platypus bill that houses the Remote Touch multifunction controller on the center console, the cabin appears largely conventional at a glance.

The exterior styling may suggest a lowly Toyota, but the cabin says Lexus more convincingly.

Any surface with which your fingertips will routinely come in contact has a consistent texture and a low-gloss finish.

One point that Edmunds brings up is that the HS 250h is expected to compete with the BMW 3-Series and Mercedes C-Class, which seems ridiculous when you consider how the vehicles stack up against one another. And yet, what is the market for the HS? Is it the same segment as the ES 350, or does it stand alone? It will be interesting to see how the model performs when it’s released in August.

The last, and perhaps the most important aspect of the Edmunds review is their video segment, which shows the HS 250h on the road—perhaps the best indicator so far on how the vehicle will look out on the road. Be sure to check it out.