END_OF_DOCUMENT_TOKEN_TO_BE_REPLACED " /> 2009 Lexus GS 450h Review | Lexus Enthusiast
Menu
Log in
Register
You are using an out of date browser. It may not display this or other websites correctly.
You should upgrade or use an alternative browser. 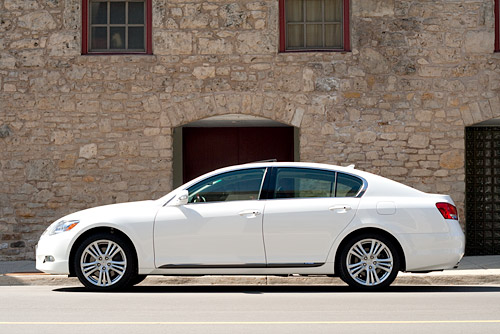 The first time I saw the third-generation Lexus GS, I didn’t like it one bit.

Compared to the previous generation’s sharp, aggressive lines, the current GS seemed to lack any real visual punch. In particular, I really disliked the rear third of the car, and constantly referred to it as “frumpy” at any opportunity. At one point, I actually admitted to liking the ES design more.

Fast forward to the present, and I find myself in a contradictory situation — I think the GS will be my next car.

It happened gradually, but broken down, it goes like this:

Take these points into account, and the GS is an obvious choice. The only problem? I had never driven one until last week. Time to find out if the love is real.

There was a Lexus commercial, admittedly for the ES 350, that declared that “behind every detail is a detail.” This thought stuck with me while examining the GS 450’s exterior. No matter the angle, there was always a minor design element that stood out, and it’s the cumulation of these details that make the GS so unique. Case in point, here’s where the rear bumper, tail light and quarter panel meet: 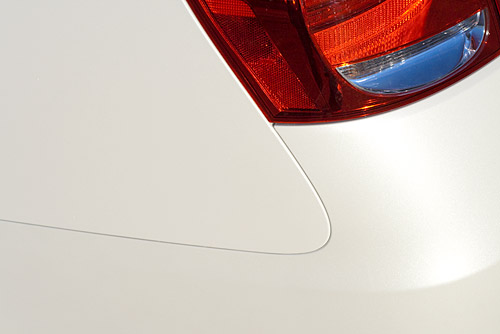 Some of the best aspects of the GS are a result of bridging the design with the previous generation. Both the headlights and tail lights are a great example of this: 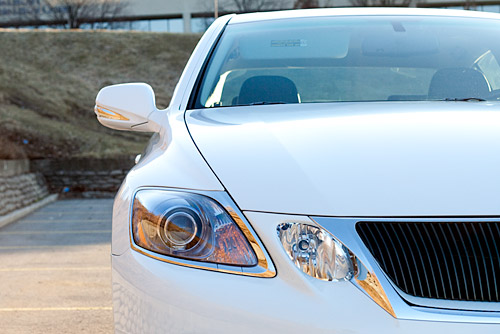 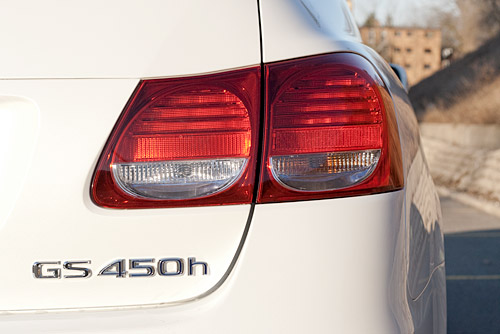 Beyond that, I was completely taken with the unique GS hybrid wheel design, which bring a much needed sharpness to the sports sedan: 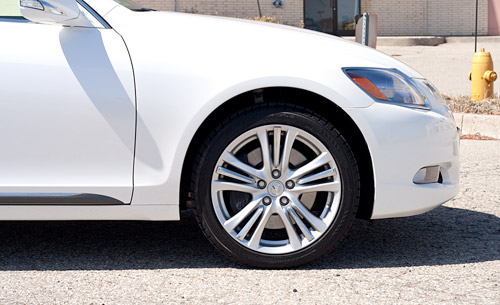 After a few days with the GS, I did finally identify what caused my initial dislike. It was the crease between the hood and the front fender (highlighted in green): 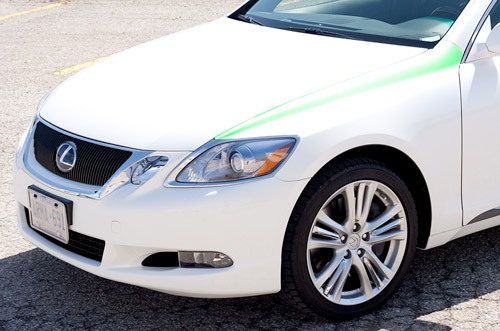 Combined with the raise in the hood, this crease creates an imbalance in the overall shape, and makes the rear seem overly large. 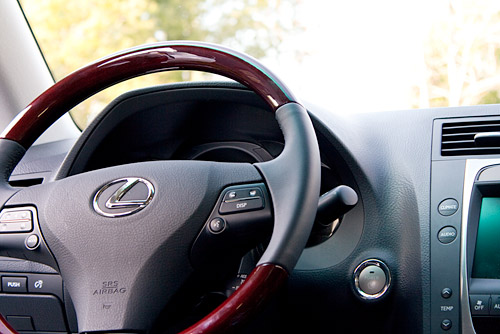 Whereas the materials in the IS 250 were soft and pleasant, the GS 450h felt tough, even harsh. The entire interior had a hard edge, bringing to mind the GS’ German competitors. That’s not to say it was uncomfortable, nothing could be further from the truth. The perforated leather seats were firm but extremely accommodating, and even after multiple days of extended driving sessions, I never felt sore or stiff, and neither did any of my passengers.

The Red Walnut wood trim added some much needed color, and the sloping center console was nicely arranged, even though the black plastic had a habit of picking up dust and fingerprints. As the centerpiece of the dash, the touchscreen was bright and responsive, Too bad it was missing a significant chunk of utility without the optional navigation package, though I would have been hard pressed to change the display from the Consumption screen.

One of the interesting touches in the hybrid GS is the absence of a RPM gauge, in its place is a kW meter used for displaying the electric motor usage: 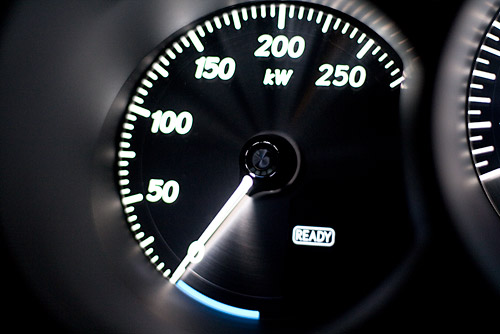 What stood out most in the GS 450h was the sound. There was the absolute silence of sitting at a stop light, the engine entirely off. The moment when the engine cuts back in and you hear the V6 engine note, accompanied by a strange wispy whir caused by the electric motor, which grows to a distant siren as you brake. It really is something.

The best thing about driving the GS 450h is how its driving experience can be broken down into three very distinct modes:

1. The Gamer: Using a combination of the Consumption display and the dynamic mileage calculator, it’s possible to drive the GS 450h as though playing a video game. Of course, it’s important not to let this become a detriment to the drivers around you, this driving mode does add considerable enjoyment to rush hour traffic, where any major delays result in major bonuses to fuel economy.

2. The Cruiser: Rest your wrist up on the wood wheel, turn up the sound system, crack the sunroof just a bit, and you could probably drive forever. The Normal suspension mode captures just the right mixture of comfort and firmness that make long trips a total joy.

3. The Demon: Flip the Hybrid Power switch, toggle the Sports suspension, and this car turns into a pure terror. The electric motor becomes a much more eager participant in the driving experience, to a point where the speed feels explosive. The tighter suspension actually seemed to shrink the size of the car, making it much easier to push your way through difficult corners.

The GS 450h’s brakes are tied into charging the electric motor, so I was expecting the brake feel to be artificial and grabby, but that wasn’t the case at all. To be sure, there was significant, abrupt stopping power if needed, but the brakes were easy to modulate.

Best of all, even with significant time spent in Demon mode, my average gas mileage was 9.1l/100km, or 31mpg.

In the end, my only complaints are minor. The switch from gas engine to electric while sitting at a stop was quite noticeable, enough to feel that awful sensation of a engine stall (which isn’t all that far from the truth). In addition, the electric engine can be quite vocal, though I attribute this more to my habit of driving with the stereo off.

The only other thing I also would liked is a little more interaction with the hybrid mode. The Consumption screen was informative, but only in a basic sense. The thing that was missing most was a baseline to compare my gas “score”. For the future, I hope an EV mode, where only the electric engine is used until the battery runs out, makes its way to the GS sometime soon.

These were just small issues compared to the overall experience. It’s hard to overstate how useful it is to be able to customize the GS 450h to almost any driving condition — really, the only thing missing was an AWD option — and I was very impressed with the hybrid performance and near-silence.

With all that in mind, do I still plan to make the GS 450h my next car? Absolutely.

Special thanks to Lexus Canada for providing this GS 450h for review.