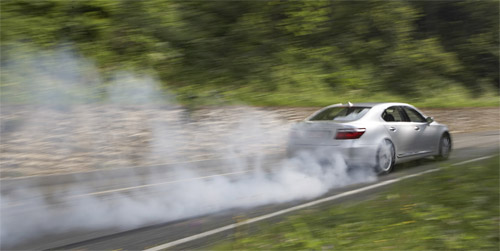 Looks like the rumor of an Lexus LS-F is growing some legs — Last week, I reported the possibility that an F-Sport variant of the Lexus flagship could be released in 2009, and now Autoblog has “confirmed” the speculation, along with some bonus IS-F sales news:

Hirokazu Koga, general manager of the Lexus Development Center and one of the men behind the IS F, told Autoblog that if the automaker goes forward with plans to create a GS F, an LS F could be in the cards.

According to two Lexus execs we spoke to, the IS F outsold both the Mercedes-Benz C63 and BMW M3 Sedan last month (we can’t confirm, since Lexus doesn’t break down sales of the IS by model), but if consumers are accepting the idea of a high-performance Lexus, than other models will surely follow.

The information from last week was much more specific, but one thing I found interesting was Hirokazu Koga suggesting the LS-F would be released depending on the GS-F’s success. In my mind, going forward with an F-variant on the current GS doesn’t really make a whole lot of sense, considering it’s the oldest L-Finesse model and, more importantly, it’s not selling very well. In that regard, an LS-F makes a lot more sense, particularly if the other rumor of a 2009 model facelift is true.

As for the IS-F outselling both the Mercedes C63 and BMW M3 sedan last month — that would certainly justify the renewed push to increase the F-model variants.