END_OF_DOCUMENT_TOKEN_TO_BE_REPLACED " /> The Lexus LF-A in the Nürburgring 24H Race this weekend | Lexus Enthusiast
Menu
Log in
Register
You are using an out of date browser. It may not display this or other websites correctly.
You should upgrade or use an alternative browser.

The Lexus LF-A in the Nürburgring 24H Race this weekend

The Nürburgring 24hour race is happening this weekend, which the Lexus LF-A is pretend-competing in, using the race environment to see how the supercar holds up over an intensive run.

Well, as it turns out, it’s probably best Lexus didn’t throw its hat fully into the ring, because one hour after the race started, the LF-A pulled into the pits with a transmission problem. This was eventually resolved, and the racing prototype is back on the track, though it’s no longer truly in the race.

Most importantly, Automobile Magazine managed to snap a photo of the LF-A’s engine while it was in the pits (click the image for a larger version): 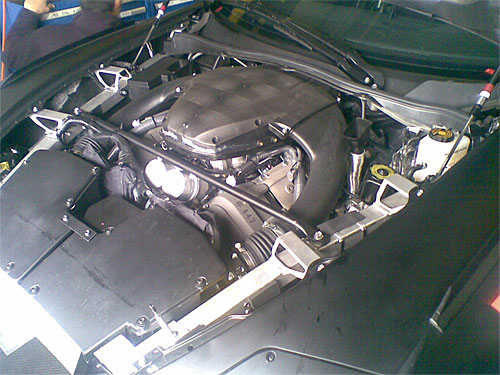 (More updates as they become available, and if you’d like to follow along, the race can be watched live right on the official site.)