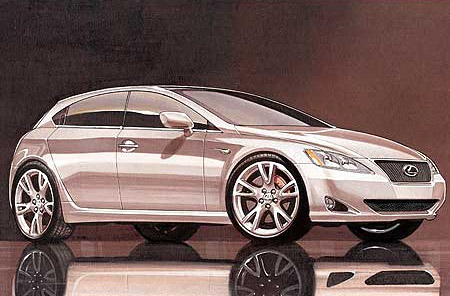 There’s been rumblings for some time that Lexus could release a super-small sedan to compete with the likes of BMW’s 1-series and Audi’s A3, and a recent article from GoAuto suggests it’s much further in development than previously thought:

To be manufactured in sedan and/or hatch guises beyond 2010, the new entry-level model plan was signed off by Toyota’s luxury car brand just prior to the Tokyo motor show, a Lexus insider told GoAuto.

“The booming small passenger market in Europe has required us to rethink the situation in terms of the sub-RX entry-level SUV we had planned,” said a Lexus executive. “In response, we have decided to shift from SUV to passenger car, under the project name of C-Premium.”

Though he would not specify what type, group manager for Lexus brand planning Shuhei Miyashita confirmed the widely speculated “new entry-level” (NEL) model, among others, was under development at Lexus.

“Yes, of course, smaller cars are a high priority,” he told GoAuto exclusively. “Yes, a new entry-level model is a strong possibility. We are always considering smaller, as well as larger, cars.”

I’ve touched on this before, and found it confounding that Lexus would think it necessary to release such a car. However, so much of my thinking is from the perspective of a North American, and all indications seem to point to this car only being available in Europe, where this small luxury car segment is strongest.

However, Lexus’ European sales cannot compare to their competitors, and it’s still very much a case of establishing the brand as a worthy competitor. Is traveling downmarket really the best strategy?