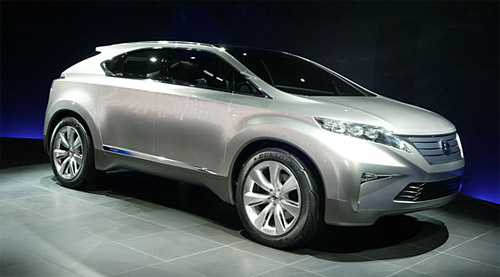 Car Magazine has put in their two cents regarding the design of the Lexus LF-Xh concept, and they like what they see:

The concept’s exterior dimensions are similar to the RX400h’s, but crucially massaged in all the right ways to alleviate the current model’s slightly ungainly ‘body-disconnected-from-its wheels’ stance.

The LF-Xh is longer and wider (by 50mm), lower (by 70mm) and with a wheelbase stretched by 130mm. The result is an SUV that looks altogether more planted to the road and agile in a sporty coupe-like manner. The slatted razorblade-style front grille adds to the smooth feel.

I’m in total agreement about the current RX model looking a little uncomfortable on its wheels, but I think this concept takes it too far to the other extreme. However, if they simply “stretched” the entire body upwards when converting the LF-Xh concept to a production model, it’s going to be a winner, hands down.

With that in mind, I went ahead with my first ever automotive image manipulation, just to see (please ignore the rear wheel): 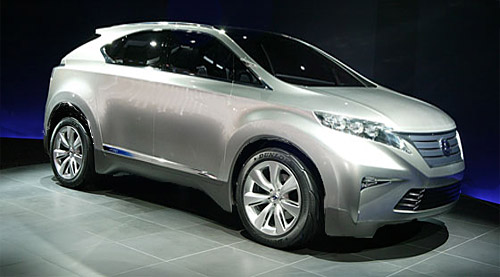 The front end is way off, but I like what it fortells.

I was a little disappointed to read Car Magazine’s blurb on the LF-Xh interior:

‘Anticipation’ is apparently a keyword for the inside in a similar way to the light that illuminates the ground by the door when you unlock the production GS model before getting in. Trouble is, Lexus is clearly not fully happy with the interior their designers made as it wouldn’t let any journalists see the finished inside first hand.