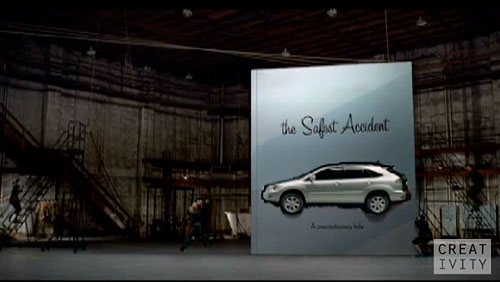 Creativity Online has posted up an interview with the art director and copywriter of the Lexus RX Pop-Up Book commercial that I featured yesterday, which explains exactly how the advert was made:

What was the ratio of real footage versus VFX [Video Effects]?

KS [Kevin Smith, Art Director]: Yeah, “a matter of putting it together” is somewhat of an understatement… But they [A52, Effects Company] made it so realistic you can hardly tell there is a lot of CG going on. They did things like keeping the wire in at the top of the page, which were used to turn the pages, and they added some air pockets and kept some of the imperfections in there so the pages looked like they moved and sat naturally.

What were some of the biggest challenges in putting this together?

KS: Well, one challenge was figuring out at what scale we were going to shoot it. There was about a month of R&D before the spot was even made. The actual framing is as big as you’re seeing it on the screen, with 20×30 foot pages. It was a giant set of green screen pages that those people did actually hold and turn.

DH: All the tabs and wheels were also built into the pages so they were actually moving that stuff.

I’ll admit, I was completely fooled. I honestly thought it was real. I thought for an instant that some elements seemed “off”, but attributed it to lighting.