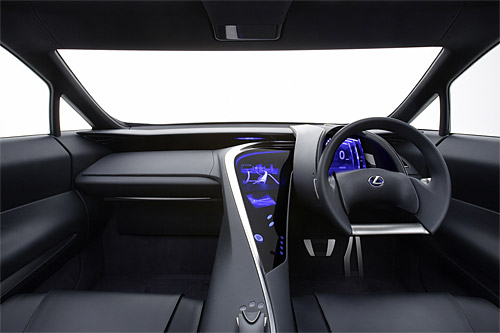 If not for its futuristic overtones, the interior of Lexus’ LF-Xh could almost be considered plain, but it’s actually something much more appealing, it’s simple, minimalist. I quite like it.

The center console, more than anything, makes me pray that one day these types of interiors find their way into production models. There are a number of concept conceits, it’s doubtful that any vehicle with will be released with a touchscreen gear selector, though perhaps that’s somehow tied into the controller.  I’m hoping for some video of the system in action from the upcoming Tokyo Motor Show, where the LF-Xh will be debuting.

I was surprised to see paddleshifts, which seems a stark contrast to the vehicle’s core audience, but maybe it’s a hint of things to come, and there really is an RX-F on the horizon. (In a world with a Mercedes R-Class AMG, anything’s possible…)