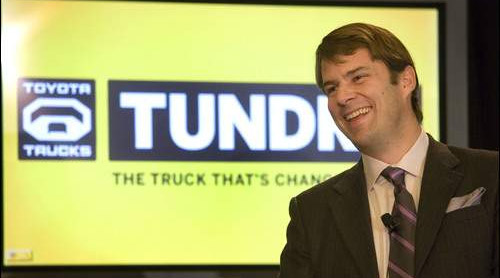 Jim Farley, general manager of Lexus and brother of Chris Farley, has been lured to Detroit, taking the position of Chief Marketer & Communications at Ford:

Farley’s arrival [at Ford] also will be yet another high-profile defection from vaunted Toyota to a Detroit automaker, suggesting that highly regarded industry pros see opportunity in their beleaguered rivals.

“Farley is their superstar,” a source familiar with the situation told me today, adding that Ford has been talking with Farley off and on for a year. “It’s a done deal. This is a good move for us. This is the guy we wanted. He has an engineering background.”

It’s hard to overstate the symbolism of Farley’s appointment by Ford. That a rising Toyota star, the head of Lexus and a founder of its Scion youth brand would bolt the Japanese juggernaut for the struggling Blue Oval is a testament to Mulally’s leadership, the strength of Ford’s current lineup, the promise of its future products and the upside in it all.

While I have no doubt that cold, hard, cash played the major role in each of these moves, I can see the appeal of jumping on a sinking ship, especially in this specific case. It would be hard to resist the challenge of changing Ford’s image, knowing full well that it could hardly be any worse.

Best of luck to both of them, though I think Farley’s going to need a whole lot more.