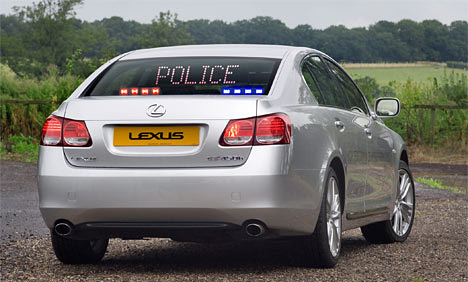 Being in Canada, where the police drive Chevy Impalas and Dodge Chargers, I can’t imagine being pulled over by a GS 450h, it just doesn’t compute. But that’s not the case in Britain, where Lexus has been steadily making inroads into the Police Fleet market, and will be attending its sixth consecutive National Police Fleet Managers Association Conference this weekend, hawking their hybrids:

Some forces have already added Lexus hybrid vehicles to their fleets and have expressed particular satisfaction with their reliability.

Stephen Botham, Fleet and Services Manager at Wiltshire Police said: “We have been impressed by the performance of Lexus hybrids and have deployed them in a variety of operational roles.”

Andy Simpson, said, “Sales to police forces continue to increase and more are now talking to us about our product range. Hybrid technology is undoubtedly a key factor in this interest as they also hear comments about the performance and reliability from other forces that already use this technology.”

I can’t say I understand it from a marketing perspective, as fleet sales are anything but glamourous, but the increased visibility on Britain’s roads may offset this brand hit.

[Via: The Truth About Cars]