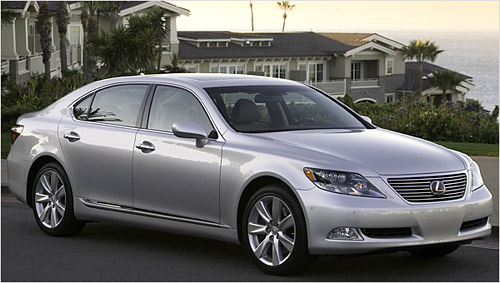 The NY Times article panning the LS 600h L has created quite a negative stir, with numerous claims that Toyota’s “green movement” is nothing but a farce.

This is perhaps addressed most vehemently by The Auto Extremist, one of my favorite automotive opinion sites:

It’s clear that the mainstream media is finally – finally – beginning to see through the green hype being foisted off on the American public by the “Master Manipulators” at Toyota. The Lexus LS 600h L is a nothing more than an overweight (700 pounds heavier than its non-hybrid counterpart), overwrought rolling monument to Toyota self-aggrandizement, its unfettered hubris and delusional thinking. The fact that you can buy a non-hybrid version of the same car and get basically the same mileage is a flat-out indictment of Toyota’s “greener-than-thou” persona … Fissures are showing in Toyota’s “Teflon kimono,” and it’s about damn time.

It’s impossible to ignore the central fact that the LS 600h L has very little over the LS 460, save for some fancy headlights and All-Wheel Drive, but there seems to a larger issue at hand. Is Toyota exploiting the success of the Prius and attempting to cash in on hybrid hype?

Lexus must have known there was going to be some hard questions asked of its decision to release the LS 600h L in its current state, with its gas mileage no better than a conventional engine. What was the rush, why did they not wait until the technology had improved?

My only guess, and perhaps the only justification, would be to offset the development costs, and to establish a car in the rarified $100,000+ range. In this price range, MPG is not a prime consideration, but with the new Lexus slogan ““Gives more to the driver, takes less from the world”, there’s definitely an air of false pretense.

Still, my central defense of the LS 600h L remains the same, this is a brand new application of an emerging technology, and it can’t all be smooth sailing. This early criticism may stand, but there’s no reason to doubt that the LS 600h L will improve considerably in the near future.