Even though I’m a fan of stock rides (with the exception of some nice rims & tints), it’s impossible for me to avoid drooling over Kelvin Tohar’s VIP’d (AutoLuxury) 2000 GS 300: 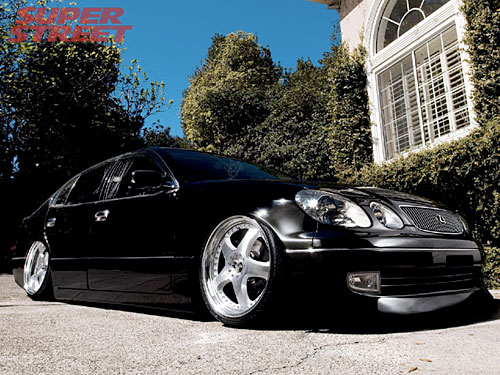 I’m practically in love with the Junction Produce body kit, but I’m just not feeling the insanely tilted rims, which is due to squeezing 19-inch Scara rims and Falken tires under a severely dropped suspension. It’s part of the look though, and it’s not something that comes cheap:

The VIP style is quite tempting, but Kelvin warns that it isn’t cheap. Even though you can pick up a used GS 300 for around $15,000, the right parts will cost you nearly double that.

You can check out the full article and more photos @ Superstreet Magazine.

Love this car, dude. I actually want mine to look like this. Good job.
Freaky,form while ruining function.