END_OF_DOCUMENT_TOKEN_TO_BE_REPLACED " /> Comparison: Lexus IS 350 vs. BMW 330i | Lexus Enthusiast
Menu
Log in
Register 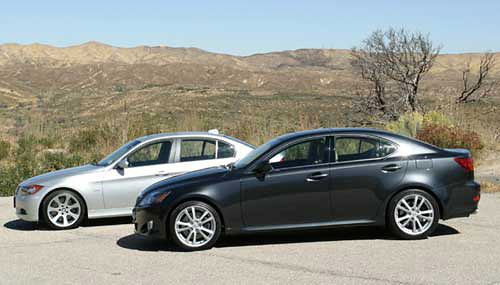 It’s now almost two years old, but I’ve seen few comparisons as detailed as Autoweb’s head-to-head showdown between the 2006 BMW 330i and the 2006 Lexus IS 350.

No stone is left unturned as they pit the two cars against each other, comparing them in convenience, design, comfort, and driving. The results couldn’t be considered all that surprising, but the thoughtfulness in the examination certainly was. Not to play spoiler, but here’s how it shook down:

Like I said, not all that surprising, though it did raise my eyebrows to see the IS 350 top the 330i in the Design category. Here’s their justification of the result:

In the end, our editors gave a slight edge to the Lexus’s aggressive, muscular stance and look-at-me styling that was just one massive rear wing shy of being over the top. But, without that hopped-up Honda Civic add-on, the 2006 Lexus IS 350 makes a powerful statement, something that should be required of any sport luxury sedan with an as-tested sticker in the $45,000 range. The 2006 BMW 330i, on the other hand, represents with a powerful stance, but the off-the-shelf look of the taillights, for example, relegates the Bimmer to the Lexus IS 350’s shadows.

As you probably guessed, with a 3-to-1 margin, the IS 350 came out on top of the comparison. The BMW will perpetually win any battle when it comes to the driving experience, but when the main concern is commuting, as it is with most drivers, the IS 350 has the 330i beat.