In a rather surprising move, Rupert Murdoch took time out from trying to buy the Wall Street Journal to announce his intention to bring News Corporation to a “carbon-neutral” state by 2010.

As part of the campaign, Murdoch “has bought a Toyota-made Lexus GS450H “green” car, and other practical measures include solar-powered golf carts to carry people round the Fox film lot in Hollywood, building environmentally friendly studios, replacing company fleets with hybrids, using renewable energy, and offsetting remaining emissions by financing windpower in India.”

Sadly, there were no photos of Rupert in his GS, so I whipped up something in Photoshop: 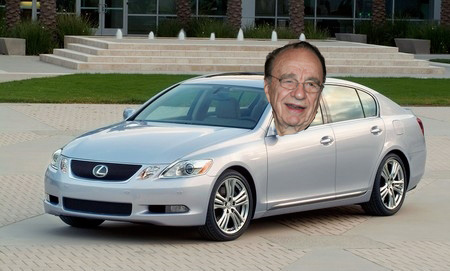