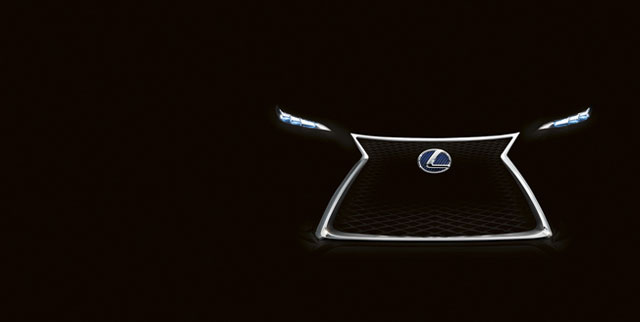 The LF-NX Concept, presented last year in Frankfurt, showed the Lexus design direction for a mid-size crossover, positioned below our RX.

Today I can confirm that Lexus will reveal this unique crossover in less than 50 days. The world premiere will take place on April 20, at the Beijing Motor Show. The new car will be called the Lexus NX.

The Lexus NX world premiere will take place on April 20 during the Lexus press conference at the 2014 Beijing Motor Show.

UPDATE: The image above is the Lexus LF-NX concept, and not a teaser of the production NX.

Nice one Lexus keep them coming new model after new model keeps us excited about the brand's Range expansion program.
This was the big auto show which I was looking for. so it's Beijing ! Looking at the teaser: same lights as for the concept (WOW), no LED daylights to see ? (strange) and it's a hybrid (sorry USA :-)).

Maybe they turned them off for the teaser or the FSport doesnt have them (Swoosh LED) because the leaked image at that conference definitely had them.
Don't you have copy of that other leaked image ? I am curious about the lights, what are they going to use ? If they are the same as for the concept, it would be something special !
This one? I think the teaser is either A) an FSport/Turbo (FSport) or B) The LF-NX concept with the swoosh LEDs turned off. If you look closely at the logo, you can see the blue dots like the logo on the LF-NX. Usually, hybrid logos for Lexus are just a blue inline. But you never know with Lexus; this may be their new hybrid logo!
Don't the daylights only turn on when the main low beams are turned off?
No, all of the Lexus' so far have the LED strip remain on with the lowbeams are turned on. However they do dim as to not be as bright. I suspect they took them out of the teaser. The lights in this teaser look like the same as the RC but in a more linear fashion.
The Turbo and Hybrid will be in the USA why Sorry?

Gonna be a sweet car!
I think it's just a photoshopped image of this:http://lexusenthusiast.com/images/weblog/13-09-04-lexus-lf-nx-front-thumb.jpg Looks like idetical...

Sadly, I think you're right :( Look at the two when they're aligned and brigthened, the details match perfectly. Why would Lexus do this to us???
On the other hand, chances are they really retained the key design feature from the concept..
That's definitely not production headlights regardless F sport or not.

No love for the NY Auto Show :(

Good point. That is messed up. Why not release it in New York? The U.S. will be the majority of it's sales. BD
Although that is true but remember Lexus is becoming more of a Global Brand so different model might not always debut in the U.S.

Love the teaser photo! A can of whuppass, with some Sweet and Sour Chicken, please! BD
I've been looking forward to this premier for a long time, but why on earth would Lexus choose Hitler's birthday (April 20th) to release the NX?