Jeremy Clarkson loves the Lexus LFA — he has praised the Lexus supercar in the Sunday Times, paid tribute on the Top Gear website, and now has this to say in the latest issue of Top Gear magazine: 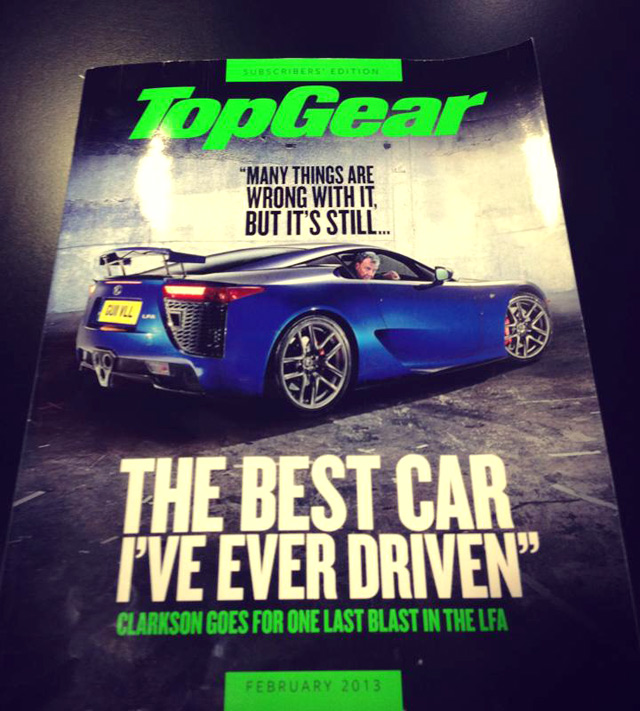 JC may have a tendency to exaggerate, but I doubt he would make such a statement lightly — Lexus has officially converted the brand’s biggest (and most vocal) hater.

He may be a toolbag, but he's a highly enlightened toolbag BD
BBC Two/BBC HD on 3 feb 2013  - Jeremy Clarkson in a Lexus LFA, Richard Hammond driving the new Dodge Viper and James May choosing the latest Aston Martin Vanquish... http://www.bbc.co.uk/programmes/b01qmn70
Jezza, Hamster and Capt. Slow... I can give a rats @BlackDynamiteOnline:disqus   $ if an auto journalist have award winning cred and reputable 100million years of reviewing experience. I rather get the opinion and funny-ness of these three than listen to some bloke write about babel about cars.
I gotta mention Chris Harris, as one of the legit ones that I actually follow and read up.

Chris also has a running love affair with both the Toyota GT86 and Lexus LFA, which he has run at Nurburgring himself, if you watch his reviews on YouTube...... BD
I've actually seen them BD, i keep watching them over n over.

Watch out for the Top Gear episode where clarkon drives the LFA on a roadtrip :)))))CAN'T WAIT!!! you should post that episode krew...
This is what happens when car enthusiasts build a car with a huge budget.
It is a big deal that the whole cover page of the magazine is dedicated to the LFA. You will not see another Top Gear issue with just one car on the cover page. That says a lot about how obsessed Clarkson has become with the LFA. For someone who has driven nearly every supercar in the last 25 years completely balls-out, for him to say LFA is the best car he has ever driven speaks huge volumes.
Well, would have been better if he said he liked a Lexus that Lexus/Toyota actually would make money off.

I think you need to consider a lot of the expense that went into the LFA, and GT86 to a lesser extent, as part of the marketing budget. Even if they never make a profit themselves, they draw people in to showrooms where Lexus can sell them vehicles that do make money.
Eh...ok. So? It would still would be better if he praised a Lexus that people would and could buy and that Lexus would make money off. It would be interestening having his thoughts about the GS and the LS. Lexus is s**t and boring, except for the LF-a, which you cant afford anyway, is what he is actually saying.

The first time he drove an LFA,he said he would be eating "humble pie" for breakfast,lunch & dinner!

That was Hammond. Not Clarkson. As a matter of fact, Clarkson did not even want to drive the LFA until over 2 years after it showed up on Top Gear because of his perception of Lexus being a boring brand. Once he drove it, he became crazy about it and it became its most favorite car of all times.

This is not the first time a reviwer said these was the best car they ever drove.... Bravo Lexus. Not even Audi, Merc, BMW got a best car ever driven for any of their cars.
Bet it was a 'Hoot To Drive'---(yawn)