read the whole thing)-- as it stands, I'll have to settle for some heavy quoting." /> Inside Line’s Early Preview of the 2012 Lexus GS 350 | Lexus Enthusiast
Menu
Log in
Register 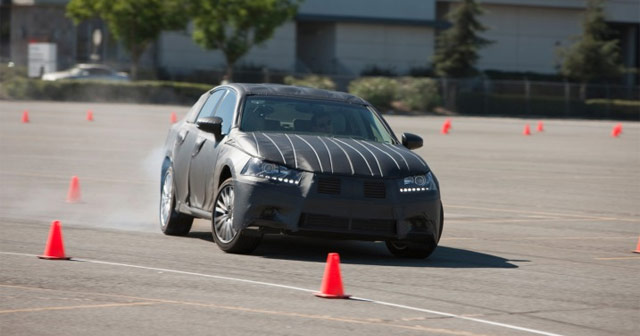 If I was to cut & paste one review of the camouflaged Lexus GS 350 in its entirety, it would be the write-up by Inside Line’s Scott Oldham (seriously, go and read the whole thing)– as it stands, I’ll have to settle for some heavy quoting, starting with the driving impressions:

The first thing I notice is that I can hear the engine. And I mean hear it. Really hear it. And it sounds good. There’s even a little gear whine. Amazing. Then I notice how perfect the seat is. It’s no longer dead flat and Buick-like. It has bolsters. It has bolsters that adjust. And it’s sized for adults.

And the driving position is a revelation. [GS Deputy Chief Engineer Koji] Sato lowered the driver’s hip point half an inch. It doesn’t sound like much, but it changes the entire character of the car. Now you sit in the GS, not on it. Hey Lexus, don’t change a thing.

That goes for the steering, too. The ratio is spot-on and the feedback from the front tires is…is…dare I say it, BMW-like.

This car is fun. And the more comfortable I get with the machine, the faster I go. After a few miles at a safe seven-tenths I turn it up a notch and the new GS hangs in there, responding to trail braking and midcorner corrections like…like…dare I say it, like a BMW. It turns in well and takes a nice set in long corners. Plenty of grip.

Bringing the GS up to a level that can compete with BMW 5-Series is a huge accomplishment, and definitely high praise indeed. 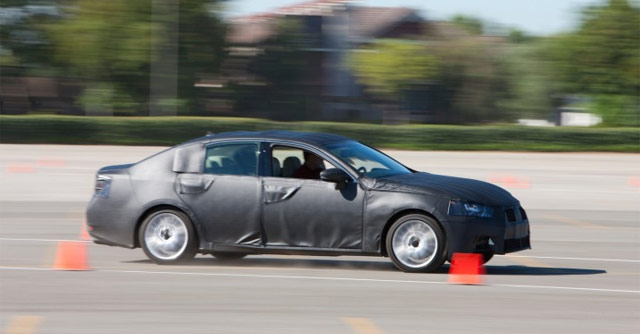 Next up, some drivetrain details:

All three will be rear-wheel drive and powered by a tweaked version of the 3.5-liter all-aluminum V6 and six-speed automatic transmission. But horsepower and torque ratings are still a mystery. Today that engine is rated at 303 hp and 274 pound-feet in the Lexus GS. Expect more, but not much more. Maybe 315 ponies to topple the rating of the BMW 535i.

Replacing the V8 GS 460 with a V6-hybrid is perhaps the clearest indication that a GS F high performance variant will be coming at some point — Inside Line suggests early 2013. 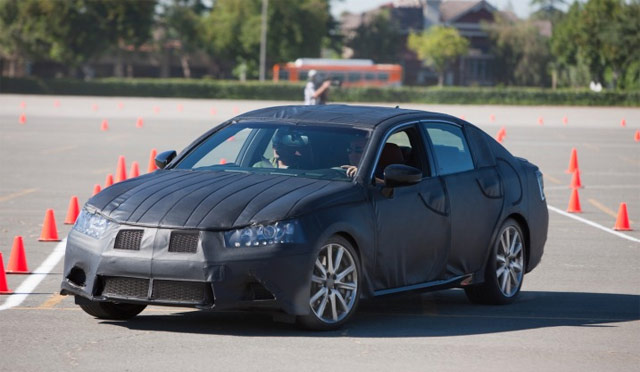 Next up, some measurements:

This is also a larger car than before. Sort of. The wheelbase remains at 112.2 inches and the overall length is still 190.9 inches, but the packaging is different. The front overhang has shrunk by 0.4 inch and the rear overhang has grown by the same amount. That has increased trunk space to the point of fitting four golf bags instead of just two. The car is also 1.2 inches taller, which has increased headroom front and rear, and when measured at the mirrors it’s 0.8 inch wider.

But the most significant change to the GS’s suspension is its width. Lexus has increased the GS’s track 1.6 inches in the front and 2 inches in the rear. That’s a huge change and it’s a big part of the sedan’s newfound agility and stability.

There was some concern that with the LF-Gh/4GS retaining the same wheelbase as the current GS, that interior space and storage would continue to be too small, but that doesn’t seem to be the case at all — that’s very positive news.

Finally, it wasn’t all positive news, here’s one complaint from Mr. Oldham:

My only real dynamic gripe about the 2012 Lexus GS 350 is with its transmission. Although it matches revs very well when you manually ask for a downshift, it only matches revs if the shifter is over in the M position. Otherwise the paddle shifters are still active but the rev-matching is not.

The transmission also insists on upshifting at redline, even when the M position is selected. In other words, Lexus never lets you touch the V6’s rev limiter. This is a problem in the mountains. More than once it upshifted to 3rd gear a split-second before I jumped on the brakes and entered a corner. Not good.

By not moving to a seven (or eight) speed transmission, the 2012 GS has one built-in disadvantage compared to its competitors, but considering the quality of the carried-over six-speed automatic, the effect is likely to be minimal.

On top of their excellent review, Inside Line also has a massive photo gallery of the camouflaged GS, including our first look at the interior, which I’ll be covering in my next post.

Again, I can’t recommend this review any higher — if you read only one of the six previews released today, make it this one.

Oh ? So this is the early preview that you said in previous post ? So Aug is came fully unveiled ? Nice !
That´s great. Being Norwegian I really needed some pleasant news today.
About the transmission ... I'm hating a transmission that would automatically shift-up when near rev-limit , that sort of transmission for me is "#$%^&*" , because the driver can't do what they wanted to do . And I'm happy about Lexus GS is now only have GS350 and GS h based on 350 , because every competitor is slowly going for small displacement forced induction engine , I hope Toyota/Lexus will be followed soon !
LOVED THIS REVIEW!
this really is a good review, and i hope people will start to more appreciative of lexus vehicles. im surprised motor trend wasnt as biased like their LFA review lol but of all the user comments the one on that page are the most ignorant car fans ever...they basically only hate it cuz its toyota and you cant get much ignorant than that, well good job lexus, change people's opinions of the brand one vehicle at a time :D

Because of the comment to Lexus GS ... I think Toyota might also applied similar change on their Camry and the Lexus ES as well . :)

I agree. And I cant think of a more awful car than an Audi.