Lexus USA has filed its official papers (PDF Link) for the LS/IS/GS valve spring recall, here is the full list of affected vehicles: 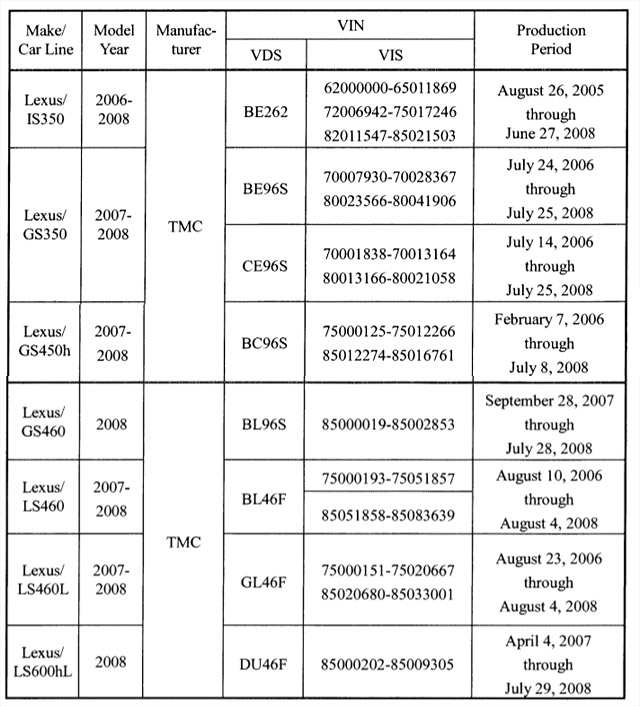 Also included in the recall document is a timeline of how the valve spring fault was discovered, which I’m reprinting here in full after the jump.

Toyota received a field technical report from the Japan market which indicated an abnormal noise and a large amount of engine shaking when the engine was started. Toyota investigated the broken returned valve spring from this vehicle. As a result, it was found that there was foreign material (Zirconia) at the starting point of breakage, and the fracture surface appeared to be the result of fatigue. Toyota investigated the production process of the spring material.

In examining another broken returned valve spring, Toyota confirmed silicon oxide at the starting point of breakage. Silicon oxide is a by-product of a secondary refining process. Although silicon oxide is eliminated during the production process of the spring material, it is difficult to completely control its residual volume.

The likelihood that foreign material of a size that would affect valve spring strength would be introduced in the manufacturing process was considered to be small, and no trend was believed to exist.

However, considering that it may not be possible to completely eliminate foreign material from the production process or detect all micro-sized objects during the inspection process, Toyota engineered and then changed the wire diameter of the valve spring from 3.3mm to 3.4mm in August 2008. At this time, Toyota continued to monitor field technical reports.

Toyota continued to monitor field technical reports, and also continued the investigation the effect of silicon oxide on the strength of the spring. To further enhance valve spring strength against the possibility of foreign material inclusions, Toyota changed the wire diameter of the spring from 3.4mm to 3.5mm in September 2009.

As a result of this investigation, it was found that there is a possibility that the strength of valve springs with a wire diameter of 3.3mm may be degraded by a micro-foreign object in the material of the valve spring, causing the spring to break.

It was also confirmed that valve springs with the wire diameter of more than 3.4mm are of sufficient strength to protect against micro-foreign material of the size that may be introduced in the production process.

Toyota decided to conduct a voluntary safety recall of all vehicles with the subject valve 3.3mm diameter valve spring within the affected range.

This safety recall will also be conducted in Japan, Canada, Australia, Europe and other countries.

My IS350 is part of the recall. :( I hope this will fix the rare start up engine noise I have experienced in the past.
I find Lexus treatment of their broken valve spring problem quite reassuring. First of all, while it is embarrassing to have made engines with bad valve springs, this is hardly a big problem. If a spring fails, the valve sticks open. Because of the engine architecture, the piston does not hit an open valve so the expensive noise is avoided. And because there are 4 valves per cylinder, losing one valve will impair performance but the cylinder will soldier on at reduced performance. And since a Lexus is absurdly overpowered, it is possible a valve spring could fail and the driver not even notice. On the other hand, driving around with a broken valve spring is not the sort of thing one would want to do to a Lexus.

I had a broken valve spring in 2009 RX350 while on I-95. According to Lexus valve fell, hit piston, engine seized. It is in for warranty repair. Losing engine at 65 mph not for the faint-hearted. No warning; sudden total failure.

I have a 2001 Lexus GS300 and the other night the brake alarm sounded along with several lights turning on on the dashboard. Within a minute I had no brakes at all. According to Lexus it was the main motor that engages the braking system that had failed, about a $2800 repair at the dealership. I was fortunate to be near a parking lot and coasted into a space using the emergency brake to slow down and stop. Had I been on a freeway I hate to even imagine what could have happened. I just want people to know if the brake alarm goes off, IMMEDIATELY pull over into a safe place because you don't have ANY time to waste. I love Lexus and this is my second one.
I have a 2007 RX 350 and just had a broken valve spring with the same type of issue.  It appears to be the first in this series, but same result, only Lexus is stating that the car needs a new short block for $12,000.

I have a 2009 lexus is250 and they said the short engine block needs to be replaced, since its under warranty dealer will not charge me anything. Hopefully this will fix the problem

I just bought a used 2006 Lexus IS 250. The engine lights keep coming on & now its making some sort of knocking noise when I put it in reverse. They say the valve springs have been replaced. Lexus just installed a new valve cover, since it was cracked due to the timing chain rubbing against it. Any ideas?